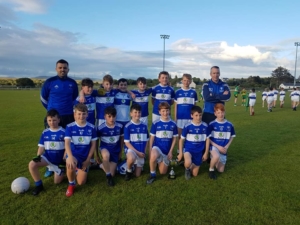 Our U12 boys football teams both won out in the SRB Div 1 A and B finals against Ardara, on 20 June 2019.  Our A team won out 3-09 to 2-09 with our B team winning 7-3 to 1-4.  Both teams were excellent on the night with every player playing their part in the wins.  Our A team started their final in great form, going in 2-06 to 0-02 up at half time after hitting some fantastic scores.A good Ardara team came back well in the second half, the lads dug deep to win by three points after a nervy last quarter to the game.  Our B team were excellent throughout their game, hitting a number of excellent goals early in the game. 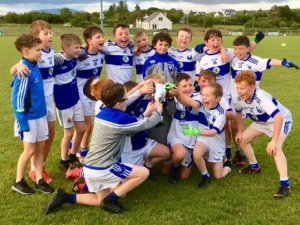 Both our U12 boys football teams competed brilliantly at the Div 1 Co Finals Day in Buncrana on 6 July 2019.  Both teams reached the Div 1 A and B finals, playing some great football along the way.  Our teams were pitted in a tough group with Gaoth Dobhair, Glenswilly and Naomh Conaill.  The A team started with a very tight game against NRB Champions Gaoth Dobhair which ended in a draw after a late sideline equalizer from Conor McCahill before the B team recorded a win over the same opposition. Both teams defeated Glenswilly and Naomh Conaill well to finish out the group games.  The A team then had to play off with an excellent Gaoth Dobhair team again to decide who made it to the Div 1 final.

Both teams played superb end to end football in the game of the day with our boys finishing the game stronger to take a one point on a scoreline of 1-05 to 0-07.  Our B team then played Buncrana who topped their group in the Co Final. The boys lost out by a few points in the end but never gave up and played right until the final whistle.

Our A team played Ardara in the Div 1 final, a repeat of the SRB Final earlier in the year. Ardara got a couple of early goals to set them on the way to victory with our boys out on their feet with exhaustion after the play off game. The A team displayed great heart to play through the tiredness and knocks in the second half and they proud of their efforts again this year. 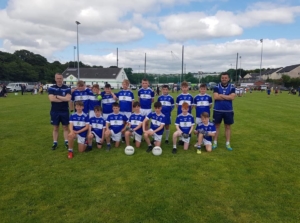 Both teams were a pleasure to work with again, huge thanks to Emmet Gallagher, Jim McMullin, Trevor James, & Ronan Boyle for coaching the boys, and to all the parents for their support throughout the year.