First up the boys recorded a championship win against southern rivals Dungloe in a high scoring and entertaining game on a warm and breezy Monday evening 22 April 2019 in Tir Conaill Park.  Playing with the aid of the breeze in the first half the boys began brightly with points from Frank Cornyn (2) and Dermot Slevin (1), before the ever industrious Mark Jordan was impeded in the penalty area and Dermot Slevin converted from the spot to raise the first green flag on the night.

Dungloe responded well with a good spell scoring three points to a Dermot Slevin point edging them back into the contest at the mid-point of the first half. Aided by the work in midfield of Senan Quinn and Ultan O’Grady the lads tagged on four points on the spin with Evan Gallagher (1), Dermot Slevin (1) and Frank Cornyn (2) all getting on the end of a number of fine passing movements to keep the scoreboard ticking over in the boys favour.

Bouyed by these scores a decisive period before half-time saw Ross O’Keeney, Evan Gallagher and Josh McCrea sweep up breaking ball in the middle third and with some fine free flowing football Dermot Slevin hit the Dungloe net before Ethan McNulty set up Frank Cornyn for another three pointer.  However Dungloe were far from done and tagged on two points and forced a fine save from Oisin McCallig before the half time whistle.

Playing with the breeze Dungloe started the second half brightly and showed their intent early with the first point of the half followed by a quickfire raid on the Four Masters goals with Oisin McCallig having to save smartly to deny an early goal. Further Dungloe attacks followed resulting in another 1-01 for the visitors but a well taken Dermot Slevin goal seemed to have settled our boys after a frenetic opening 10 mins to the second half.  Dungloe again responded with a goal of their own and added another 2 points before Ultan O’Grady then found the net for our boys.  Dungloe remained unbowed and got their third goal and but for timely turnovers from Conor Gillespie, Andrew Monahan, Diarmuid O’Domhnaill and Jamie Gorrell they could have closed the gap even further.

The seesaw nature of the contest was to continue with our boys again getting a foothold in the middle third through Senan Quinn, Evan Gallagher and Conor Reid, and this possession resulted in a point from Senan Quinn and a fine effort into the breeze from distance from Ethan McNulty that pushed Four Masters further ahead. It was Dungloe who chipped away at the Four Masters lead and when a goal chance came their way in the dying minutes it was a fine double save by Oisin McCallig, first with his foot and then at full stretch to his left hand post, that ensured our boys ran out 5-11 to 3-15 winners.

Moyle View was the venue for the lads second championship outing on Friday 26 April 2019. It was to be disappointment at the final whistle with a couple of unfortunate goals deciding the contest in Milford’s favour in the last six minutes of play. The boys had started very well with two excellent Dermot Slevin points from play and one from a free by Dermot settling them into the contest. Evan Gallagher was next to score for us and when Dermot Slevin added another from a free in the twenty second minute it took a free from Milford to leave just one between the teams.

Our best spell in the game came just before half time when a Senan Quinn point was added to by a goal from Ultan O’Grady leaving us four points to the good at halftime. This was nothing more than the boys deserved with Evan Gallagher, Senan Quinn and Ethan McNulty winning plenty of possession from kickouts at either end, and Jamie Gorrell and Diarmuid O’Domhnaill marshaling the Milford threat in the first half.

Milford got a breakthrough early in the second half with a goal to leave just one between the sides. The next twenty minutes or so proved very even with both sides adding three points each in this period, our boys moving two and then three ahead only for Milford to respond. However with just seven minutes remaining a Milford shot for a point dipped wickedly into the top corner this was followed quickly by a mix-up on or goal-line which let Milford in for another and despite Frank Cornyn rattling the crossbar it was Milford who ran out 4-09 to 1-09 winners on the night. 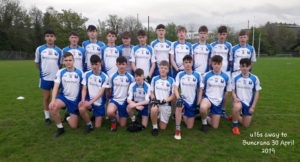 A goal fest in the Scarvey, in the first half, was followed by a fiercely contested second half which saw honours even keeping both sides in the hunt to win the u16 county title. Missing a few regular starters it took a while for the lads to settle and by the twelfth minute Buncrana had registered 3-01, with a well taken Evan Gallagher point and 1-01 from Frank Cornyn the Masters reply from a tough opening period.

However our lads responded well and replied with a fine point from play from the impressive Conor Reid followed by goals from Dermot Slevin and Mark Jordan before a Buncrana goal put the hosts back into the lead by the twentieth minute. Undaunted by this setback the lads continued to play good football and a Mark Jordan point was followed by a Senan Quinn goal, but again Buncrana responded with a well taken goal with almost the last kick of the half, to leave the sides level at the break.

It was Buncrana who started the brighter in the second half with a point from a free followed by one from play before Frank Cornyn replied for our boys with a point from play following a good move along the left hand side with Liam McLaughlin, Josh McCrea and Conor Reid all contributing in fine build up play. Our boys began to get a foothold around the middle third with Andrew Monahan, Senan Quinn and Jamie Gorrell getting on top, while on the right wing Conor Gillespie, Evan Gallagher and Dan Dunnion were combining well to hold Buncrana at bay. While both sides had chances from the tenth to the twentieth minutes a Buncrana point was responded to by Dermot Slevin point from play to leave our lads one behind entering the final ten minutes.

In those closing minutes Ethan McNulty can count himself very unlucky to see his palmed effort rebound off the crossbar into the arms of a waiting Buncrana defender who gratefully cleared their lines.  Next saw our keeper Ethan Potter brilliantly smother what seemed like a certain a goal bound effort. Dermot Slevin calmly pointed two frees to leave our boys one point up with three minutes to play but Buncrana were not done and they patiently worked the ball forward and netted to give them a two point lead with just two minutes remaining.  Dermot Slevin immediately responded with a point from play and with the clock entering added time our boys worked the ball forward in a final attack before winning a free 25 metres from goal.  The resulting free was pointed by Dermot Slevin to leave the sides level 6-04 to 4-10 at the final whistle.