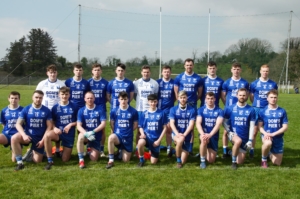 Aided by a strong breeze St Nauls started the stronger with three early points from frees by Stephen Griffen. Conor McDaid opened the scoring for Four Masters with a point from play in the 11th minute but St Nauls pulled further ahead with a long range point from Shane Conneely from play and two further frees from Griffen.

A goalmouth scramble in the Four Masters square could easily have ended up in the net but John Boyle reacted quickest to come out with the ball before being fouled.

McDaid was unlucky to see his free come off the post to drop wide before Cathal Lowther added another from play for St Nauls. McDaid was causing St Nauls defence problems and had two good points from play before being blocked down going for goal. A point may have been a better option as St Nauls went up the field to add another point from play by Ian Campbell to close out the half leading 0-8 to 0-3.

Four Masters would have felt at this point that they were in with a good chance with the breeze at their backs for the second half. However, St Nauls hit a purple patch in the first 15 minutes to add 5 points – another free from Griffen, a free from Campbell and three from play by Lowther.

St Nauls then had Barry Griffen red-carded for an elbow on Conor Rooney in the 19th minute and Four Masters grew into the game. They had 4 unanswered points from McDaid (3 frees) and a fisted point from play by Oisin Reid. With 3 minutes left Four Masters were awarded a penalty for a foot-block on Jamie Crawford’s attempt on goal. Gavin Mulreany got down well to his right to push out Conor McMonagle’s shot but Aaron McCrea kept the ball alive and prodded it across the square for Kevin McBrearty to tap home.

St Nauls had some anxious moments as Four Masters fired some high balls into the square but they dealt with these to see the game out and earn a deserved win. 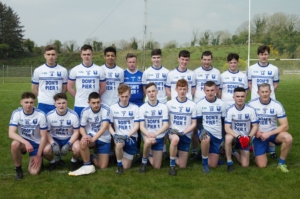