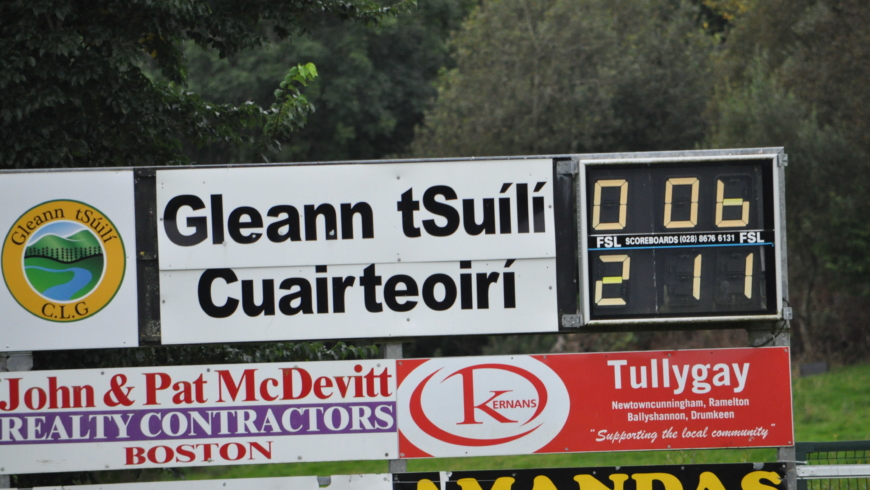 “No point discussing Four Masters as they’ll beat nobody” – the view of one pundit leading up to the Senior Championship games at the weekend and, based on results this year, it was hard to argue with that. Lining out without their defensive talisman, Dylan Kennedy through injury, and Thomas McGowan & Aaron McCrea (studying abroad), the journey to Glenswilly didn’t promise much.

But Four Masters players showed belief that had been lacking through the year and put in a performance they can be proud of.

Michael Murphy opened the scoring in the first minute from a free and Masters fans, present in significant numbers, would have been forgiven for thinking “here we go again”. However Masters then started to dominate and Kevin McBrearty had a point after a sustained period of possession. Two wides for Glenswilly – one from Murphy – sandwiched a turnover by Barry Dunnion which set the tone. Jamie Crawford had a point from the right wing before two Conor McDaid frees put three between the sides.

A free from Murphy reduced the arrears but a wide from Caomhinn Marley and a point from Caolan Loughney put Masters in command again. A free from Murphy was sandwiched between points from play by Loughney and McDaid. A free from McDaid pushed the lead out to five before the talking point of the first half occurred. A long, diagonal ball into the square found Oisin Crawford and his palmed attempt seemed to get a touch off Martin Cassidy’s glove onto the crossbar with Cassidy quick to his feet to deny Crawford’s second effort. The umpire raised a green flag but after discussion between referee and both umpires a free out was awarded. It was a let off for Four Masters but Glenswilly scarcely deserved a goal at this point. Four Masters continued to dominate and after a scything run John Boyle popped over the final point of the half.

Glenswilly brought in Donncha Gallagher for Oisin Crawford at half-time but again Four Masters seized the initiative with a point from McBrearty. A wide from Leon Kelly was followed by a black card for Neil Ward for a drag down with Oisin Reid replacing. In the third minute of the half Murphy had his and Glenswilly’s only point from play in the whole game which says a lot for the Masters defense but also for the lack of incisiveness of the Glenswilly attack.

Murphy followed this up with a point from a free. As the intensity ratcheted  up the cards appeared with Kevin Breslin, who had an impressive hour on Murphy, picking up a yellow. A couple of wides for Masters and another pointed free from Murphy in the 12th minute of the half brought the lead down to four. A slick move involving the irrepressible Dunnion, Leo McHugh and Boyle opened up a goal chance for Crawford but his low shot was wide of the post.

Caolan Kelly will have been relieved the colour of his card was yellow for a high tackle on Oisin Reid and it was then all Masters. McDaid had a pointed free before, with Glenswilly looking for an all important goal, Sean O’Kennedy made a fantastic block on a goal-bound effort from Kelly. Masters worked the ball up the field with Loughney, Crawford and O’Kennedy again involved before O’Kennedy was coolness personified slotting to the net.

Oisin Reid was in the wars again with the linesman noting an off-the-ball strike which resulted in a straight red card for Joe Gibbons but Reid also had to retire injured. A high tackle on Dunnion left him unable to continue and a yellow for Ciaran Bonner. A final strong run from Crawford left McDaid with an easy task of slotting to the net for the icing on the cake for Masters. Defensive efforts were vitally important too with O’Kennedy on the line getting his foot to a quick Neil Gallagher free and a great high fetch by Patrick Reid back in his own square from a long ball in.

A whole team performance from Four Masters that they can be proud of with everyone playing their part. McBrearty and McHugh’s midfield dominance laid the platform but the standout performers were Breslin for the work he put in shackling Murphy without resorting to the dark arts, Loughney who was involved in everything from turnovers to link play while tacking on two points of his own, and Crawford who bamboozled the Glenswilly defence in the second half. For Glenswilly Murphy put in his normal effort and Neil Gallagher made some fine catches in midfield but they were dominated throughout from start to finish by this Masters team.

However it will count for nothing if Masters cannot repeat this performance away to Glenfin next week.