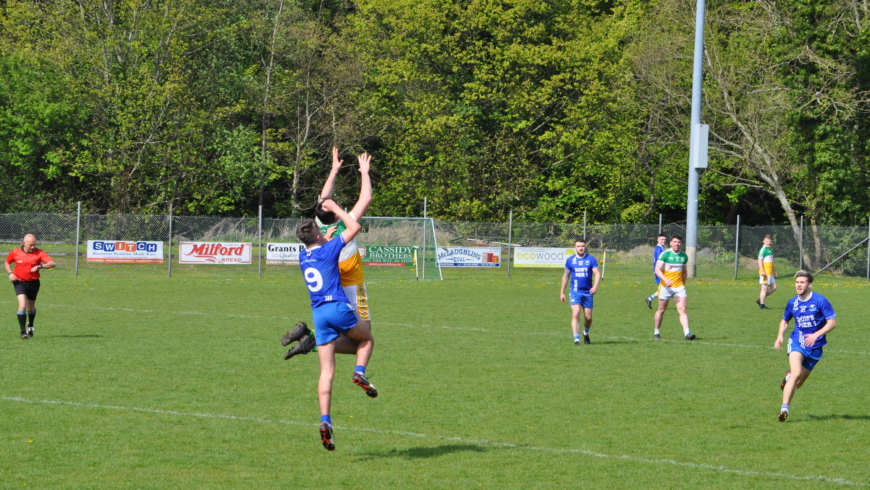 Buncrana were first out of the blocks and created three quick goal chances. Martin Cassidy made two superb saves in the Masters goals with one going behind for a 45. Caolan McGonagle took this but it drifted wide. The third chance also went for a 45 with a combination of Cassidy and Kevin Breslin keeping the goal safe. This time Harry Doherty came up from goals to slot the 45 between the posts.

This was followed by a long-range point from the returning Conor Rooney. Masters then took control of the middle third with Patrick Reid getting on a lot of ball. Two points from Kevin McBrearty sandwiched one from Cathal Canavan to take Masters 3 points clear. A 20 metre free was taken quickly for Four Masters over the Buncrana defence to Aaron McCrea but the ball drifted left and took him away from goal. However McCrea rescued this and his punch across the goal left the onrushing Thomas McGowan an easy task to palm to the net.

Masters were totally in control now but had two quick wides from Conor McDaid and McGowan before McGowan picked up the ball around the Buncrana 40 metre line, left his marker in his wake and weaved past two more defenders before crashing the ball to the net.

An incident then on the Masters right wing off-the-ball with McGonagle involved left Oisin Reid on the deck clutching his face. After several minutes treatment Reid rejoined the fray but the referee was unsighted and took no action.

Ben Bradley had a good point from play but the rest of the half was the Darach O’Connor show as with Buncrana now getting a better supply of ball at midfield ‘Jigger’ started to create havoc in the Masters defence. He made a strong jinking run down the Masters right and when his shot was blocked was first to react to push the ball across the square to leave Oisin Hegarty with the simplest of tasks to palm to the net. He followed this up with another solo run and stroked the ball to the corner of the net leaving Cassidy with no chance.

Four Masters got back up the field but a long range shot from Emmett Doogan drifted wide. From the kickout Buncrana won the ball at midfield and worked it up to John Campbell who turned and beat Cassidy from close range. The final play of the half saw Cassidy make a superb double save before being brought down bringing the ball away. A melee ensued with the referee brandishing yellow cards to Cassidy and Bradley when it appeared a more dangerous strike went unpunished.

On the resumption Conor McDaid had a quick point from a free to level the scores but then Buncrana began to pull away.

Points from Campbell and Oisin Doherty (2) were followed by a goal from Campbell. Masters came back with two points from McDaid (one free). Although there were only four points between the teams at this stage Buncrana didn’t look in any trouble. They had dropped a sweeper back in front of McGowan to ensure the supply lines were cut off.

Doherty had another point for Buncrana followed by another from substitute Ryan Curran. McDaid responded with a free before Campbell closed out the scoring with a free.

Buncrana have their first points in Division Two while Masters will hope to have some of their injured players back for the trip to Dungloe.