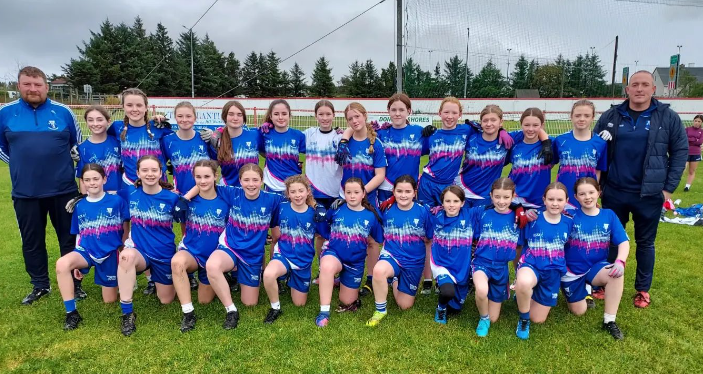 The Four Masters held a family 5K on what was a very wet and miserable Sunday, but in true Four Masters spirit the local community came out in support and the event was a great success for a very worthy cause. Fantastic achievement by all involved with almost €2000 raised for the Creeslough Community Fund, Thanks to everyone involved for their help and support on the day.
Four Masters Club House Development Draw
Week 4 Draw Winners
€1000 Gareth Martin (Glenfin)
€500 Brendan Sammon (Leitrim)
€300 Dylan McHugh (McHughs Bar)
€200 Darren Williamson (Donegal Town)
€200 Heather Harrison (Mountcharles)
€200 John Bushell (Ballybofey)
Weekly Lotto Results
No winner of this weeks Lotto draw for €3200 Lotto Jackpot
Drawn numbers were 4, 11, 23 & 24
The winners of the €50 Doms Pier1 Vouchers – Damien Dunnion, Keadue & Kate Meehan, Abberadorney
Next Jackpot €3300
Four Masters Annual General Meeting
The Four Masters GAA Club will hold its AGM on Saturday the 19th of November at 7:30pm, in the Parish Center, Donegal Town. Like all clubs the Four Masters can only function with the help of great people who volunteer to get involved. The Club has grown massively in the last few years and there are great plans to progress the club further, starting with the new Club House Development. The Committe(s) will need help more than ever this year, to ensure we can continue to provide training and games (football and hurling) for all of our members and to help with the next phase of our club development. Please come along to our AGM and get involved if you can. We need people to help in all areas, from stewarding in the car-park and helping out in the tea-hut, to coaching, managing or helping with a team, we also need people to join our fundraising and club house committees. We would welcome new and old members helping in any way they can. Please join us in the Parish Center on Saturday the 19th of November at 7:30pm, and bring a friend!!

Well done to all the boys and girls teams from all of our five local Primary Schools who played out their finals this evening in Tir Conaill Park. We had seven finals in total with 200 players taking part in a busy Tir Conaill Park. In girls finals there was win for both Scoil An Linbh Iosa teams, and Gaelscoil na gCeithre Maistri. In the boys finals there was wins for Scoil An Linbh Iosa A, Gaelscoil Na gCeithre Maistri, Glebe NS and Scoil An Linbh Iosa B played out a fantasic draw in their final to each receive a joint shield. Thanks goes to everyone that helped out each week of the league; especially our referees, to all the players who played all games in a great spirit, and to all the teachers/coaches for their continued efforts to promote GAA among their schools. A huge thanks also goes to the Cooney family for allowing the club to run the league each year (this is our 6th year) in memory of Michael, and to Michelle and Shauna Cooney for organising treats for every player each year.
Fixtures/Results

Our minor boys prevailed in the Division 1 County Semi Final on Saturday night against a strong Termon side,  in a great contest in which it took extra time to separate them. Played on a very wet and slippy surface in Mac cumhaill Park it was nip and tuck throughout the first half with the lads holding a one point lead at half time.
Four Masters 0.5
Termon 0.4
The second half started with a bang as Termon scored a quick goal to go two up but the boys responded brilliantly with a goal of their own through Daniel Quinn. The boys pushed on and had two points to spare going into the last five minutes but Termon weren’t done and with a minute left they scored the equalizer to send it to extra time.
Final score
Four Masters 1.7
Termon 1.7
The first period of ET saw Termon take the lead again but this was cancelled out by captain Caolan Sweeney who scored a lovely point . Into the second period and with both teams tiring it was really down to the wire but in a two minute spell ,Conor mc Cahill sealed the win with a point and a fantastic goal coming in of the wing, and whilst a very gallant Termon team fought to the final whistle it was our fellas who took the spoils. It was a breathtaking end to a fantastic contest in which both teams played an equal part. The boys have now qualified for the County Final to be played on Bank Holiday Monday afternoon against Glenswilly in O’Donnell Park, Letterkenny at 2.30 PM.
It can’t be overstated what these boys have done over the last number of years for our club and it is very fitting that they have a minor county final to play in, in what is the final year of underage football for a number of them.
Well done to team and management on getting to another county final and best wishes to all concerned .
U13 Boys
Our U13 boys will play St Eunans, in the Div 1 Championship semi-final this Sunday 30th October at home in Tír Chonaill Pairc, throw-in 12:00 noon, all support welcome.
Our development team, put on a brilliant display in their playoff game against Robert Emmets, on Sunday last. After conceding 2 early goals the team tightened up and were defensively excellent. The boys put in a huge shift throughout the game, and they left everything on the field, restricting Robert Emmetts to some fine long ranged points which ultimately won it for them in the end. The boys have been playing against teams a year older this year so its all good experience going forward. The coaches would like to commend the lads on their behaviour on and off the pitch throughout the year, which was regularly complimented by other management. Thanks to parents for support and travelling as always.
U13 Girls
Four Masters U13 girls who were well beaten in their county quarter final by a very strong Dungloe team. Well done to all the girls who played very well and did brilliant to get to this stage. They are looking very well in their new kits – kindly sponsored by clubman James Cullen & Balon Sport. With Christmas approaching, please support Balon with their Four Masters range of clothing.