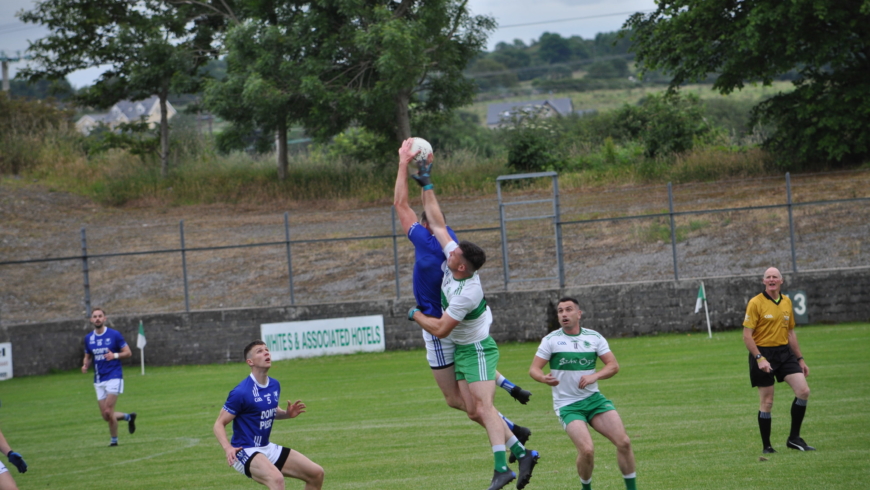 On a bright evening in Ballyshannon, after a fairly even first half, Aodh Ruadh completely dominated the second period to run out comfortable winners. Four Masters lined out without the suspended Martin Cassidy as well as Kevin Breslin and John Boyle from the heart of their defence but they had the return of Leo McHugh after ankle surgery for the first time this year.

The game began at a fast pace and Aodh Ruadh were first to threaten the posts but had a couple of wides before Oisin Rooney pointed in the fifth minute. Shane McGrath put Aodh Ruadh two up with a point from play to which Conor McDaid replied with a point of his own. Eamon McGrath then extended the lead to two. Scores were hard to come by and the next point came from Thomas McGowan after 12 minutes. A quick free from Nathan Boyle caught the Masters defence napping and Johnny Gethins was on hand from half-back to slot beyond Eamonn Jordan in the Four Masters goal.

David Quinn replied with a pointed free before a well worked Aodh Ruadh move set Diarmuid McInerney free in front of the goals but he poked his shot just wide of the post. This looked a costly miss at the time as Masters worked their way up the field and a long ball into the square was tapped down by Kevin McBrearty leaving McGowan with a clear run to blast the ball to the net beyond the dive of Peter Boyle.

Points from Nathan Boyle, Cian Dolan and a free from McInerney pushed the lead out to three. A reshuffle by Four Masters saw Jamie Crawford replacing Aaron McCrea with Conor Rooney slotting back into defence. A point from play by McInerney sandwiched between points from McDaid and Quinn left the score 1-7 to 1-5 at half-time.

Aodh Ruadh started the stronger in the second half and had a quick point from McInerney. McDaid replied with a free. After six minutes Shane McGrath had the first of his two goals to put the Ballyshannon men five clear. A point from Nathan Boyle was replied to by Ronan McHugh. Rooney had his second point but had a quick response from Masters with a point from Oisin Reid after 15 minutes. This was Masters last score of the game as they pushed for goals later on.

McInerney had two more points from frees before McGrath had his second goal on 21 minutes. The game fizzled out as a contest with Masters pressing for goals but coming up short. Aodh Ruadh finished out the game with points from Niall Murray and Gethins.

Masters had one final chance with a penalty when a long ball into the square was contested by Reid but was handled on the ground by an Aodh Ruadh defender. McGowan’s shot had Boyle beaten for the second time but it came back off the bottom of the post before the final whistle went.

Having looked comfortable throughout Four Masters Reserves were hit by three late goals, one with the last punch of the ball to concede a one-point defeat.