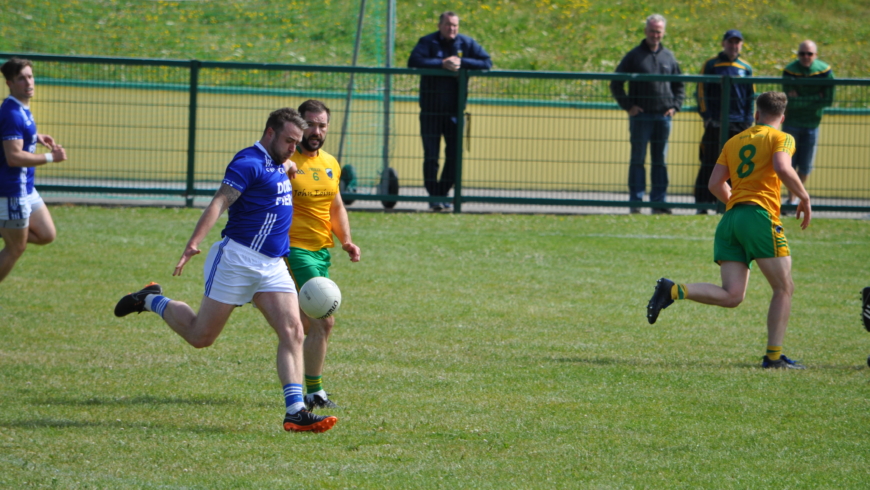 On a bright but breezy afternoon in Glencolmcille, Naomh Columba started the brighter with a strong breeze at their backs. They had the first point of the game through Ryan McNern in the second minute. Four Masters grew into the game and after 3 minutes Conor Rooney levelled the scores.

Some resolute defending by Four Masters held the scores level until the 9th minute when Paddy Byrne found some space and pointed. Four Masters, into the breeze, were content to soak up the pressure and hit the Glen men on the break. This tactic was working well but following two wides for Masters Naomh Columba pushed clear with a point from Gavin McGinley.

A turnover in the Four Masters defence was worked up the field with John Boyle heavily involved and when he picked up the return pass from Caolan Loughney he was impeded in the square. Although Boyle got the ball away  and Ronan McHugh poked it home the referee had already blown for a penalty which Thomas McGowan blasted to the net under the dive of Pauric O’Donnell.

A point from a free by Ronan Gillespie brought the teams level. Ryan Gillespie, who scored 2-6 in the return fixture in Donegal Town was getting little change from his marker, Kevin Breslin, and was surprisingly off with some of his frees although the breeze didn’t help. Another strong run from Boyle left Loughney with a goal chance but his shot was blocked away by O’Donnell and fell to a Glen defender to bring the ball away.

A point from Kieran McBrearty pushed Naomh Columba ahead again but a wide from a free by Ronan Gillespie missed the chance of extending the lead. Four Masters would have felt things were going their way with a one-point deficit going into half-time and a strong breeze in their favour for the 2nd half but on 27 minutes the dismissal of their goalkeeper, Martin Cassidy, changed the balance of the game. Having made an important save at the feet of Ryan Gillespie, Cassidy was hauled to the ground on exiting with the ball and was given a free. While extricating himself from the tackle to take the free the referee signalled he felt some foul play had occurred and brandished what looked like a very harsh red card.

Masters had to reorganise and Eamonn Jordan took over between the posts with Emmett Doogan making way. There was still time for Declan McGuire to double Naomh Columba’s lead before half-time.

County panellist Aaron Doherty was introduced to the fray at half-time with Ronan Gillespie making way.

Naomh Columba were first to score with a well-worked point from Ryan Gillespie but Masters looked the more potent team sitting deep before breaking forward and taking their scores. Two points from Conor McDaid brought it back to a one point game, the second of these points when there was a glimmer of a goal chance but McDaid kept a cool head and settled for a point. A Gillespie free brought Naomh Columba two clear before Masters hit a purple patch.

Naomh Columba were pushing up on the Masters kickouts but couldn’t match Kevin McBrearty’s fielding and Boyle’s slaloming runs which resulted in a lot of space available for Masters to flood into. From the first of these McDaid pushed the ball wide but soon made up for this with a long-range point from a free. McBrearty broke free from another one of his fine catches and sent another ball between the sticks. A ball in from McHugh was awkward for McGowan but he controlled it well before taking on two men on the outside, beating them for pace and flicking the ball with the outside of his right boot beyond the stranded O’Donnell.

A sixty-metre free from McGowan dropped about a foot under the crossbar and was well dealt with by O’Donnell under pressure from Oisin Reid. A point from Pauric Ward was quickly replied to by one from Loughney. A point from Gillespie brought the lead down to two. Wides from McGowan and McDaid with similar at the other end by Martin Cunningham followed by a free from McDaid which dropped short left the scoreboard untroubled entering the last 5 minutes.

Oisin Reid got hold of the ball near the endline and fisted a point with four minutes left. Masters defence was strong with a number of turnovers most notably by Brian Fegan. Naomh Columba had a wide from Doherty before a free from Gillespie brought the lead back to two points. An interception by the excellent Dylan Kennedy brought the ball out of Masters defence but the referee brought back the play for a foul and Doherty pointed from the resulting free. It was into the 36th minute when the final whistle went and Masters breathed a sigh of relief. 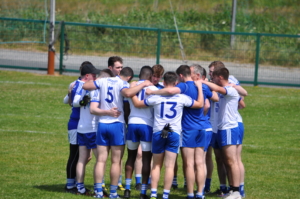